The above circuit is obtained by replacing the feedback resistor RF in the inverting amplifier configuration by a capacitor Cf. We assume that opamp used here is an ideal one. V2 is at virtual ground potential. R1 is the input resistance and RL is load resistor.

Expression for the output voltage:

A practical opamp circuit is different from an ideal opamp. There is a feedback resistor Rf present in parallel with the feedback capacitor. The value of Rf is very high.

Practical op-amps are having finite open-loop gain, input offset voltage, and input bias currents. Due to this, there may be an output voltage without any input signal. The large value Rf resistor is used to reduce this effect.

When a square wave is applied at the input terminal of the integrator, due to change in the input signal amplitude the feedback capacitor keeps charging and discharging.

When the negative half cycle arises the direction of current is reversed and the capacitor linearly charges to produces a positive-going ramp output.

The output of the circuit is a triangular wave whose frequency is dependent on the value of R1 and Cf. This circuit is commonly known as a ramp generator circuit. 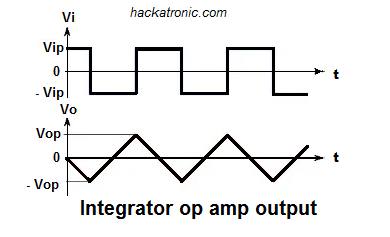 Output for a sinewave input signal: When AC input is applied at the inverting input terminal the output voltage produced is 90° out of phase with the input signal, producing a cosine wave.

When the input signal is a triangular wave, the output waveform is sinusoidal. The above circuit acts as an active low pass filter.

Applications of an OP AMP integrator:

Here are some important applications of integrator as follow: