A Triac is a bidirectional device it allows current to flow in both the directions. here we will discuss Triac working and vi characteristics, In the SCR family, after the SCR, Triac is the most widely used device for power control. Triac is a three-terminal device, with the terminals named as main terminals 1, 2 (MT1 and MT2) and gate, out of which gate is the control terminal.

Triacs with large voltage and current ratings are now available in the market. Triac is a bidirectional device, i.e. the current can flow in both the directions through it. (Note that SCR is a unidirectional device). The basic structure of the triac is as shown in Figure. 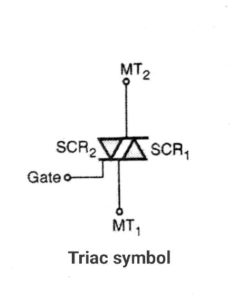 Its operation is equivalent to two SCRs connected in antiparallel The two main terminals are designated MT1 and MT2 (main terminal 2 and main terminal 1). The gate is near MT1.

When the gate is open, the triac will block both the polarities of the voltage across MT1 and MT2 if the magnitude of voltage is less than the breakover voltage of the device. (See the characteristics of the triac). That means the triac will remain in the OFF state.

The characteristics of the triac are as shown in Figure and they are similar to those of an SCR both in blocking and conducting states. The only difference is that the SCR conducts only in the forward direction (anode-cathode) whereas the triac conducts in both the directions.

The other difference in the operation is the triggering mechanism. The triac can be turned on by applying either a positive or negative voltage to the gate with respect to terminal MT. Whereas the SCR can be triggered only by a positive gate signal.

As seen from the Figure, the characteristics of the triac are the same as that of two back-to-back connected SCRs. 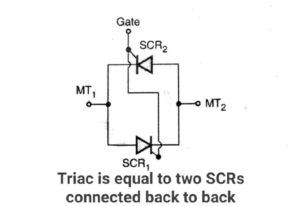 The triac characteristics can be divided into three regions of operation:

Blocking state or off state.

Conduction state or on the state.

Depending on the polarity of the voltage applied between its MT2 and MT1 terminals, it will operate in either the first quadrant or the third quadrant as shown in Figure.

MT2 positive w.r.t. MT1: Operation is in the first quadrant

MT2 negative w.r.t. MT1: Operation is in the third quadrant.

The three important states of triac operation are:

Conduction or on state.

When a forward voltage less than the breakover voltage Vn is applied with the gate terminal open the triac can successfully block the forward voltage without getting turned on.

Conduction or ON state:

The triac is equivalent to two SCRs connected back to back. Therefore it is a bidirectional device that can conduct in positive as well as negative half cycles of the supply voltage.

The gate current can be positive or negative. The forward and reverse breakover voltage reduces with an increase in the gate current.

Depending on the polarity of supply voltage and the polarity of the gate current the triac can operate in four different modes of operation as follows: l, ll. lll and Vl.

Rating of a triac: