A voltage comparator is a circuit which compares the voltages at its input terminals and switches the output to either high or low depending upon which input was high. 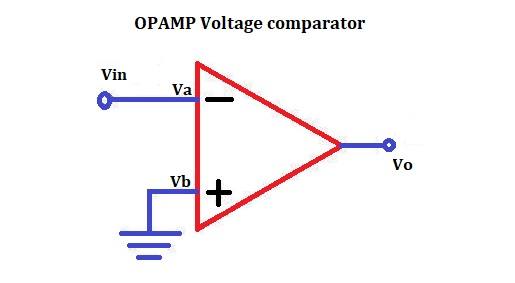 An opamp can be easily configured to act as a voltage comparator. The output of the comparator is in phase with the input terminal signal. Whenever the input voltage Vin goes about the reference voltage the output of the opamp switches to +Vcc.

The output may be unipolar or bipolar depending on whether the opamp has a dual supply or single rail supply.

Characteristics of a good comparator circuit:

The speed of operation of a comparator circuit should be very high so that it can respond immediately if there is an instantaneous change in the input signal.

the accuracy of a good comparator depends upon the following characteristics High voltage gain:

the voltage gain of a comparator should be very high enough so that if there is a very small input it gets easily amplified to the maximum saturation voltage.

when the common-mode rejection ratio of a comparator is high it can easily reject the noise coming to its input terminals.

The input offset voltage and current should be small so there is no requirement to compensate for it.

In a conventional diode rectifier there is a voltage drop and some distortion but this problem can be solved by a precision rectifier.

A zero crossing detector is nothing but sine wave to square wave converter.

A window detector is a combination of inverting and non inverting opamp comparator.

It is used in oscilloscope

It is used to detect the phase difference between two signals by their arrival times.

A to D converter